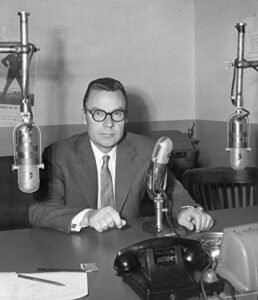 Known as the “Dean of Personal Development“, Earl Nightingale broadcast his radio programs for more than three decades on over 1,000 radio stations in 12 countries around the world, making him one of the most listened-to broadcasters in history

He was a fiery motivational speaker who believed that the key to success lies in the simple realization that “we become what we think about”.

Change Your Life in 19 Minutes 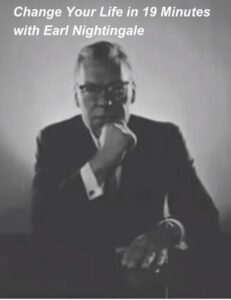 Change Your Life in 19 Minutes with Earl Nightingale

Earl Nightingale as a child I wanted to know why some were so poor, while others, appeared to be so rich. Why some people were so miserable, while others, appeared so happy. I wanted to know how people from the same family, neighborhood and culture could have distinct socio-economic goals. Simply, I wanted to know what made people turn out the way they do. Nightingale offers brilliant reasoning why some thrive while others become complacent. Of course, we all know there are social constructs and systematic variables that heavily influence a person’s chance to become wealthy. However, there is something to be said for those who persevere with determination and faith through life’s most difficult situations. There is something special about the person who can dream for a better life AND create a plan of action AND do the work AND stay focused with unwavering commitment and fortitude. How can we move our own mindset to reject mediocre living and demand extraordinary life? How can we be consistently successful?

Downloadable Immediately after purchase.
Back to Main Page