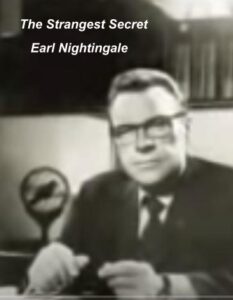 As the host of his own daily commentary program on WGN, Earl Nightingale arranged a deal that also gave him a commission on his own advertising sales. By 1957, he was so successful, he decided to retire at the age of 35. In the meantime, Earl had bought his own insurance company and had spent many hours motivating its sales force to greater accomplishments. When he decided to go on vacation for an extended period of time, his sales manager begged him to put his inspirational words on record. The result later became the recording entitled The Strangest Secret, the first spoken word message to win a Gold Record by selling over a million copies. In The Strangest Secret, Earl had found an answer to the question that had inspired him as a youth and, in turn, found a way to leave a lasting legacy for others About this time, Earl met a successful businessman by the name of Lloyd Conant and together they began an “electronic publishing” company which eventually grew to become a multi-million dollar giant in the self-improvement field. They also developed a syndicated, 5-minute daily radio program, Our Changing World, which became the longest-running, most widely syndicated show in radio.